All true tea comes from the same basic plant, camellia sinensis. It doesn’t matter if its green, white, black, oolong, or puerh, they all start from the same source. True tea is made from the leaves and leaf buds of the Camellia sinensis not its flower. C. Sinensis does ineed have flowers. They are small white flower with six to eight petals and a yellow center (Harvard University, 2013. The seed of the plant is about 1 cm in diameter, the same diameter as a wine cork, although round. C. sinensis is an evergreen plant growing from sea-level to almost 7,000 feet above sea level. 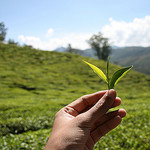 There are two main varieties of this plant that make up the majority of tea consumed on the planet, C. sinensis var. sinensis and C. sinensis var. assamica. Var. sinensis is the tea plant originating from China. Var. assamica is the tea plant originating from India, yet there are many cultivars of tea that are used in production. Broadly, cultivars are plants that have been selected and propagated by humans because they possess certain desirable traits, like surviving rapid weather changes. Given that the Chinese first documented the drinking of tea in 2737 B.C.E. and the first tea plantations are mentioned in 1000 B.C.E., there has been ample time for humans to intervene and cultivate the tea plants with the characteristics they want.

There are several differences between the assamica and sinensis varieties. Assamica has larger leaves, can handle the lower elevations and harsher sun better than sinensis. Both varieties prefer humidity, well-drained soil, and at least 50 inches of rain a year. This means that the plant grows best in tropical and sub-tropical climates. Some C. sinensis cultivars can handle temperatures below 54 degrees Fahrenheit, but neither can handle prolonged exposure to temperatures at or below freezing. For ease of harvesting both varieties are kept in low hedge like shape by most plantations. However, if left unkempt the sinensis variety has been recorded as turning into a tree as high as 50 feet; the same height as a mature willow tree. C. sinensis var. sinensis are mainly found in China, Japan, and Taiwan. C. sinensis var. assamica are found in India, Nepal, Sri Lanka, Kenya and Argentina.

Various pests cause problems for C. Sinensis, like caterpillars and moths, though not all pests are bad. For example, harvesting it after an infestation of leaf hoppers, a small green grasshopper like insect, produces a very fragrant tea. Some of the most highly-prized oolongs, especially from Taiwan, are created from tea leaves that have been recently munched on by the leaf hoppers. By biting the leaves, the leaf hopper causes the plant to produce different enzymes that ultimately create the complex flavors in these oolongs. It is also worth noting that, like other plants, C. sinensis produces caffeine, as a defense mechanism against insects such that it often is grown in near organic conditions by default.

The amount of rain, temperature and soil affect the favor of the final tea product that we consume. In general, the better tasting, more complex teas are grown at higher elevations because the growing seasons are shorter. The length of a growing season is determined by the right mix of water, sun light and temperature that the plant needs to sprout to new growth. If that is not present all the time, the plant goes dormant, allowing it to store up energy for when the conditions are right for growth again. The “energy” comes from the organic chemicals found inside the leaves. It is these organic chemicals that produce the flavor of the tea. At lower elevations, the growing seasons are longer, and in some places, like Kenya, are year round, which does not give the plant a chance to rest.

Lastly, it should be noted that many of the tea producing nations are worried about the effects of climate change on tea. The Kenyan Tea Board is working with local tea farmers to improve water storage and soil conservation measures while also researching the use of drought resistant cultivars of tea to mitigate the effects (The Tea Board of Kenya, 2012). The Tocklai tea experimental station in the Assam region of India, which has recorded the temperature and rainfall for over 100 years, has reported an increase in the temperature and a decrease in rain, affecting tea yields and quality of that tea. The drop in yields has not really been seen on the market as more small farmers have entered into growing tea, which has off-set the drop, but the Tea Research Association expects the effects to surface soon (Das, 2013). Given the importance of C.sinensis to many cultures on this planet I suspect we will see cultivars that can keep producing in extreme weather conditions. I can only hope the taste of this wonderful plant is not lost in the process of preserving it.